Why fewer people want to attend #lawschool and what the law schools can do about it. https://t.co/LastpvcoAr

The above tweet references the above article in Forbes.

Of interest to pre-law students is:

LSAT scores are a good predictor of whether a student will pass the bar exam, and a recent analysis by the advocacy group Law School Transparency shows a steady decline in scores.

Last year, LSAT scores at 37 law schools were so low that half of incoming students were considered to be at high risk of failing the bar. In 2010, the same could be said for only nine schools.

California jury rejects graduate's suit against law school https://t.co/crjBqkTdRB – #lawschool is no guarantee of a job

The above tweet references an article about a law school graduate who sued a law school on the grounds that the school misrepresented the employment prospects.

SAN DIEGO (AP) — A jury found Thursday that a San Diego law school did not mislead a graduate who sued on the grounds she was lured to the school by false promises that her degree would land her a job after graduating.

The San Diego Superior Court jury rejected Anna Alaburda’s claim against the Thomas Jefferson School of Law on a 9-3 vote that was reached after about four hours of deliberations over two days.

While more than a dozen similar lawsuits have been filed in courts across the country, the case is believed to be the first of its kind to go to trial.

Alaburda, who filed her lawsuit in 2011, argued that Thomas Jefferson used inflated data to bolster the success rate of its job-seeking graduates. The 37-year-old woman graduated near the top of her class in 2008 and says she has been unable to find a full-time job as a lawyer. Meanwhile, she said has been saddled with $170,000 in student debt. She sought $125,000 in damages.

The trial came amid growing debate over such promises by schools competing to recruit students. The lawsuit was among more than a dozen similar ones filed in recent years against law schools, including Golden Gate University School of Law in San Francisco and the University of San Francisco School of Law. Though most of the lawsuits have been dismissed, critics say they point to a need for greater regulation and transparency for law schools, so prospective students know their employment prospects, the debt they will incur and their chances of successfully passing the bar.

Michael Sullivan, an attorney for the law school, acknowledged “isolated mistakes” and “clerical errors” in data collection but said there was no evidence that the school lied. He said the verdict set no precedent but may send a signal to other students who sue. “Having an opportunity where it’s fully litigated, and depositions and documents examined, to see the hype, the chatter about that did not prove to be the truth, as found by a jury, I think that’s a helpful message,” Sullivan told reporters after the verdict.

Is the problem the law schools or the market for lawyers?
END_OF_DOCUMENT_TOKEN_TO_BE_REPLACED

The article referenced in the above tweet covers a lot of ground and is interesting. As you know, the number of applications to law schools in the United States has fallen over the last few years. Obviously, it’s easier to “get in to” to U.S. law schools than it was. (This is not true in Canada which has such a small number of law schools.)

In any case, you will find this article to be an interesting read.

At least two studies, including one this year that examined admissions exam scores from 2000 to 2011, have concluded that scores on the test, administered by the Law School Admission Council, closely track later bar passage rates.

Mr. McEntee of Law School Transparency, a graduate of Vanderbilt University Law School, said his group’s recent study showed that many schools were admitting students whose lack of legal aptitude made them vulnerable to failing the bar. And, at the same time, they are incurring six-figure student debt that will weigh them down in the future.

The steady erosion in admissions scores between 2010 and 2014, Mr. McEntee, said in his study, is “directly linked to the falling bar exam passage rates in many states.”

The author of the article – Elizabeth Olson – has written a number of law school admission articles that you might find to be of interest.

If you are interested in #lawschool or taking your #LSAT – Learn fro someone who has done it http://t.co/4aWxktp45E

I have been a “Pre-Law Counsellor” for many years. Over the years I have encountered a number of books of interest to future law students. They include:

Leaving aside “The Bad and The Ugly”, I wanted to share with you  a VERY Good back for Pre-Law students. Actually, can share not only the recommendation, but the book itself.

“Take The Bar and Beat Me”. The author is Raymond Woodcock. 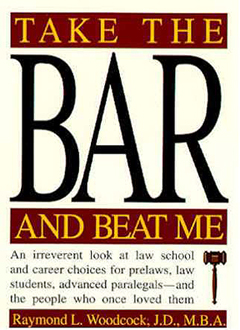 And yes, I received Mr. Woodcock’s kind permission (some years ago) to share the book with you for free.

I hope that you enjoy the book as much as I did.

Does do the principles in this 2005 article on joint Canada U.S. #lawschool programs still make sense? http://t.co/hyzbIlEcX4

– Law school degrees combined with a graduate degree in another discipline.

You will spend three years in law school. Why not pick up another degree along the way.

– the University of Windsor

– the University of Ottawa

There is a shortage of law schools in Canada. As a result, more and more people are leaving Canada to attend law school. The goal is to return to Canada – go the NCA route – and become admitted to the bar in Canada.

What is the NCA and what role does it play in bar admissions?

You will find basic information here. The question is:

A possible opportunity in Arizona …

Video: 'It's dream crushing': University of Ottawa law student on being $150,000 in debt http://t.co/yjOz1awm1k – reality of #lawschool

Debt is a growing problem in all segments of society. Education is expensive and can result in sizable debt. The video referenced in the above tweet is a about a University of Ottawa law student. It’s well worth watching.

Elizabeth Olson of the New York Times has written two interesting articles about law school graduates and the state of the job market. The article are independently interesting, but they really should be read together:

END_OF_DOCUMENT_TOKEN_TO_BE_REPLACED

Steep decline in U.S. bar exam scores sparks finger-pointing over who's to blame for the decline. http://t.co/7TzyWs9ytD via @WSJ

A steep decline in bar exam scores on the most recent test has led to an outbreak of finger-pointing over who’s to blame for the downward swing.

In a sharply worded letter, the dean of Brooklyn Law School on Monday reproached the head of a national bar exam group for suggesting to law school leaders that their graduates who took the July exam were less prepared than students who sat for the test in previous years.

The dean’s letter came in response to an October memo by Erica Moeser, the president of the National Conference of Bar Examiners, addressed to law school deans across the country in which she defended the integrity of the group’s exam and raised concerns about the ability of the would-be lawyers who took it.

The NCBE is a national Wisconsin-based non-profit that prepares widely used standardized portions of the bar exam, including the Multistate Bar Examination, a multiple choice test that typically counts for half of a test-taker’s score.

All but three of the state’s 15 law schools have reported a decline in pass rates for first-time candidates who took the July bar exam, a result that has disappointed, puzzled and angered school officials.
The 3,740 first-time testtakers from New York’s law schools posted an 83 percent pass rate, down five points from last year.
See the Chart: July 2014 Bar Exam Pass Rates
The decline comes at a time when most schools have revamped their bar preparation programs, requiring more students than ever to enroll in test-taking skills courses and hosting free bar review weekends on campus.
In fact, they insisted the class of 2014 was better prepared for the test than any graduating class before it. Several expressed concerns that this year’s downward swing went well beyond expected year-to-year fluctuations.

Have some faith in Canadian Christian #lawschool http://t.co/kPiofrEYgn – Real significance is that is Canada's first private #law school

Whence all this indignation about a Christian law school?

This argument is nonsense. Lawyers routinely represent clients who act in ways that not only diverge from their own values (as in, say, their choice of sexual partners) but actually appall their counsel: theft, drug pushing, fraud and murder. All of those lawyers graduated from law schools that can be presumed to frown on such behaviour. Yet lawyers are trusted to provide services to those who act in those ways.

My first year of law school has been incredible. As the first in my family to attend university and law school, I cherish and embrace each moment. I understand that I have earned an unparalleled opportunity to continue my education at the University of Ottawa, Faculty of Law.

My first semester of law school was a challenging, yet memorable experience. I was introduced to the largest volume of reading that I could have ever imagined and I was exposed to the basic principles of Property Law, Criminal Law, Torts, Public Law, Contracts Law, Legal Research, and Legal Ethics and Professional Responsibility. My professors are all leading experts within their fields. For example, my Torts professor Anthony Daimsis, was an associate at an international law firm located in Austria prior to teaching at the University of Ottawa, Faculty of Law, and is frequently approached to serve as an arbitrator in domestic and commercial international disputes, and my Dispute Resolution professor Ellen Zweibel, was a Staff Attorney, U.S. Federal Trade Commission, a Lawyer-Partner at Roper, Lief, Zweibel & Mains, a U.S. Tax Consultant and a legal assistant for Daley, Black & Moreira prior to teaching at the University of Ottawa, Faculty of Law. My professors bring fascinating perspectives to lecture and always have an interesting story to tell. I also enjoyed the guest speakers that visited the Faculty of Law such as the Chief Justice of the Court of Appeal for Ontario, Honourable Warren K. Winkler, who spoke about his experience with class actions and the Court of Appeal; Bob Potts, who was invited to speak to my Property Law class about his experience representing First Nations in land claim settlements since the early 1980s; and Jane Doe from the case Jane Doe v Metropolitan Police, who was invited to speak to my Criminal Law class about her experience as a sexual assault survivor