My Amazon review of the "Official #LSAT SuperPrep II" https://t.co/CgVjxJW1JQ – a necessary, but not a sufficient condition 4 ur #LSATPrep

The information from the Law Services site includes: 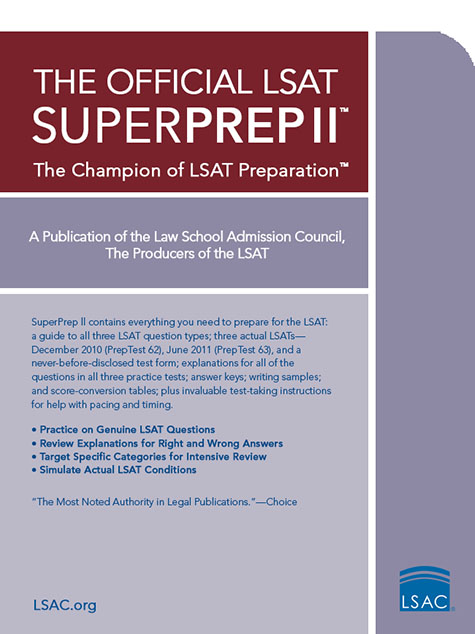 SuperPrep has long been our most comprehensive LSAT preparation book, and SuperPrep II is even better. It is a completely new book that includes 3 complete, practice tests and new explanations for all of the items in those tests; Comparative Reading items and explanations; and new test-taking advice. The practice tests are PrepTest 62 (December 2010 LSAT), PrepTest 63 (June 2011 LSAT), and one test that has never before been disclosed. Also included are answer keys; writing samples; and score-conversion tables; plus invaluable test-taking instructions for help with pacing and timing.

END_OF_DOCUMENT_TOKEN_TO_BE_REPLACED

The February LSAT scores are out. There are four groups of score recipients: END_OF_DOCUMENT_TOKEN_TO_BE_REPLACED

The general requirement of a “valid and reliable admission test” is not a specific requirement  to  use  the LSAT.  (It is true that the ABA rules require a law school to demonstrate that another test is valid and reliable.) I predict  that there will be  competitors to the LSAT– and it is high time. END_OF_DOCUMENT_TOKEN_TO_BE_REPLACED

It seems to me that there’s some room here for a Canadian law school to set itself apart by announcing a new, more holistic approach to admissions by waiving the LSAT requirement and perhaps doing something like having admissions interviews, which no Canadian law school does, instead, on top of using references and personal statements and extra-curriculars and undergraduate performance. If not for a whole
entering class, then perhaps schools could set aside a certain portion of first-year seats for applicants that do not require the LSAT, like the University of Michigan law school did in 2008. END_OF_DOCUMENT_TOKEN_TO_BE_REPLACED